'Evolution of Hip-Hop': Minister Louis Farrakhan tells it like it is 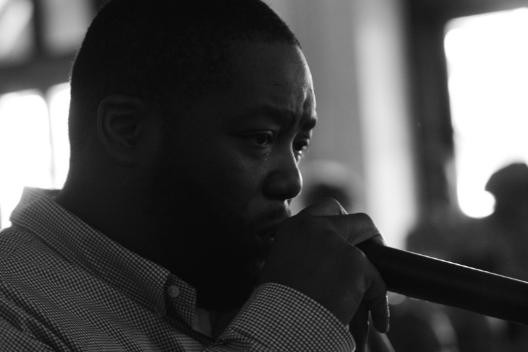 Oct. 14, 2007, started like any other old Sunday. Me, dreading Monday and feeling slightly guilty about not remembering the last time I went to church (I think it was my cousinâ&#128;&#153;s wedding). But little did I know, one afternoon would make up for a lifetime of spiritual truancy.

With the shadow of the overhyped BET Hip-Hop Awards looming over the city, special invited guests abandoned the red carpets, name dropping, and VIP theatrics to embrace the core values of love, compassion and humanity. A whoâ&#128;&#153;s who of hip-hop artists, industry tastemakers and activists huddled into Justinâ&#128;&#153;s on Peachtree seeking spiritual renewal via â&#128;&#156;The Evolution of Hip-Hop: An Intimate Conversation with the Honorable Minister Louis Farrakhan,â&#128;&#157; sponsored by AllHipHop.com and 9196 Management.

Anyone questioning Nation of Islam leader Farrakhanâ&#128;&#153;s effectiveness need only witness a room full of â&#128;&#156;industryâ&#128;&#157; folk humble themselves enough to plead for direction, as was the case with a teary-eyed Killer Mike, who was so overwhelmed by the rousing speech he not only offered a public apology for his headline-grabbing feud with Big Boiâ&#128;&#153;s Purple Ribbon record label, but also sought guidance in coping with an industry built on capitalism and greed. Mikeâ&#128;&#153;s impromptu alter call has already become legendary.