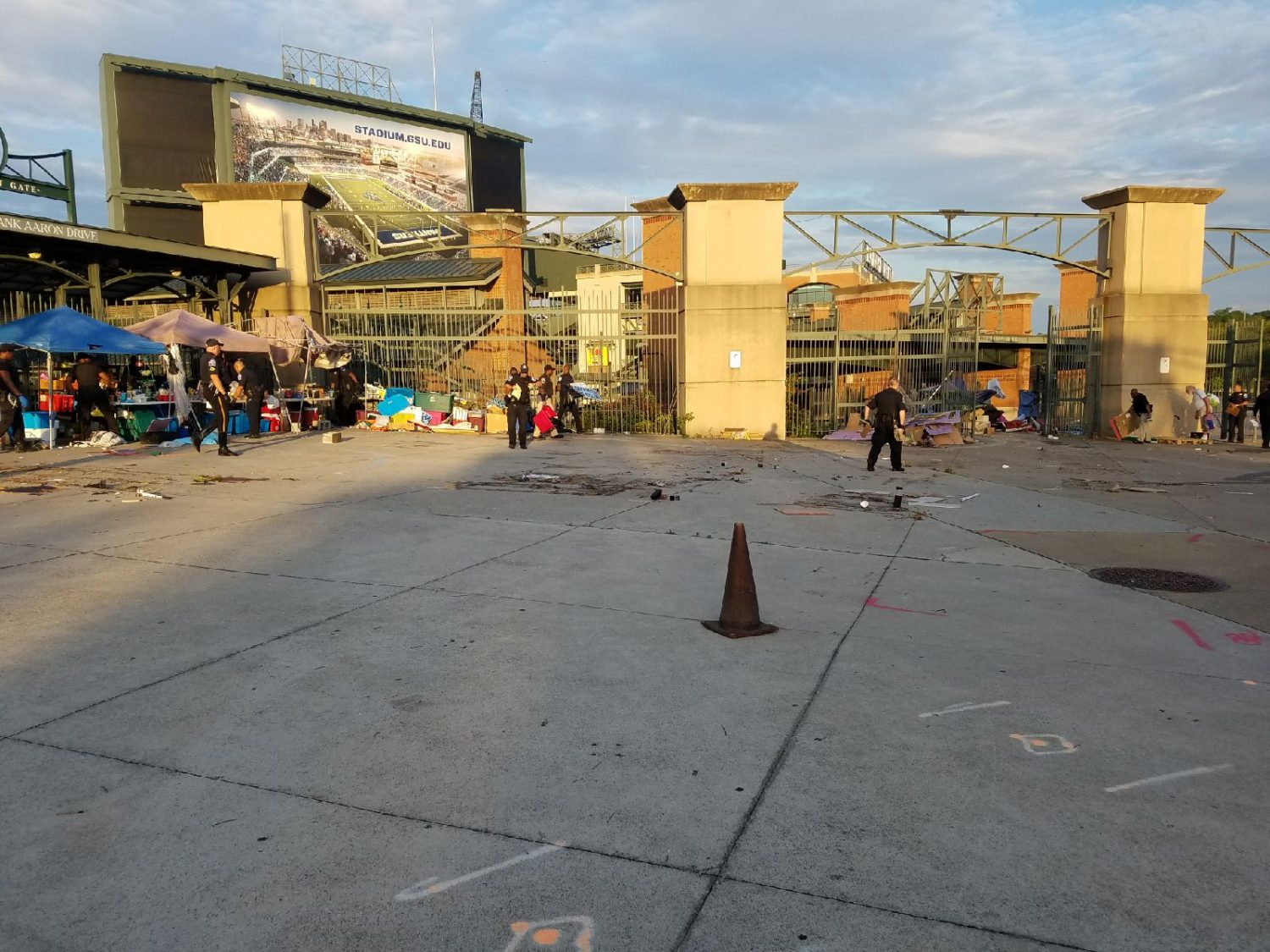 Photo credit:
#TentCityATL is no more. Around 7 a.m. this morning, Georgia State University's police force dismantled the 24/7 campout that was organized in April to protest the school's redevelopment of Turner Field and its nearby parking lots. Supporters of the Turner Field Community Benefits Coalition, the advocacy group that pitched the tents and actively fights the now-underway redesign deal of the stadium area, had been camped out for some 60 days.But GSUPD Chief Joe Spillane tells Creative Loafing that the group had recently been abandoning the campsite at night, leaving tents and trash littered about the Ted's front stoop. He says campus cops had been making "tent checks" in the mornings and found the place empty on a few occasions. "I think the tents were mostly symbolic," Spillane says. "No one's been sleeping there [lately]." But Christopher Hollis, a TFCBC member and GSU student says that couldn't be further from the truth. Hollis, who was sleeping outside the tents as a night watchman, was awoken by the clamor of police converging on the camp. He claims there were about five others sleeping in Tent City this morning, many of whom were threatened with arrest for trespassing. More supporters, he says, left for work soon before police arrived. He and Asma Elhuni, another student supporter, claim the cops tore their campsite apart, shredding tent tarps and canopies as they dragged them into a pile. Plus, Elhuni says, no police ever poked their heads into her tent on the days that she stayed the night.Still, Spillane says police were much more docile than the coalition asserts. He says the activists were afforded the chance to get a moving truck to cart off their belongings. But, he also says his troops were "here to clean up a nuisance," according to video of the incident on social media.The chief, who said in April that the coalition could remain at Turner Field until the Panther Football season kicks off in August, denies allegations of trashing tents, adding that some zip ties had to be cut to detach tarps from school property.A statement from the university says that a few residents from stadium neighborhoods had filed complaints about what they considered to be "an eyesore and traffic, health, and safety hazards." Spillane, via text, adds that the pallets and garbage could have been a fire hazard if left unattended. Yet Hollis says the group has a no-fire policy to prevent just that. For years the coalition has been calling for GSU and its development partners to sign a binding community benefits agreement to help shield stadium neighbors from displacement and to offer them education and job opportunities, among other demands.Georgia State University President Mark Becker and Carter Development CEO Scott Taylor maintain that a CBA is not an avenue they'll take to protect the nearby neighborhoods, although they've recently opened up negotiations for what's called a community investment plan. But TFCBC members lament that won't be enough to address their concerns of gentrification.The group is now in talks to determine the next course of action, although supporters know one thing for sure: They want Becker to resign. "President Becker has never showed up to the [community benefits] negotiation; he only sends a lawyer," says Elhuni. "Why are we paying this man so much money if he's not going to act like a leader??